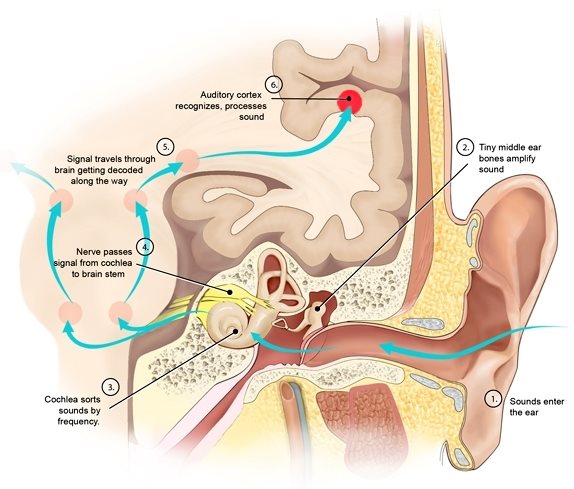 The ear is divided into outer, middle, and inner sections. The outer ear is comprised of the pinna (the external portion you can see) and the ear canal, ending at the eardrum which is the barrier between the outer and middle ear. The eardrum is attached to the malleus, which is the first of a chain of three tiny bones or “ossicles” in the middle ear (the other two bones are the incus and stapes). The stapes is attached to the inner ear or “cochlea,” which is a snail-shell shaped organ full of tiny sensory hair cells submerged in fluid. Sound waves travel through the ear canal and hit the eardrum which vibrates. That vibration is transmitted through the middle ear by the ossicles, which amplify the sound on its way to the cochlea. In the cochlea, the sound wave triggers a response from the corresponding sensory hair cells which stimulates the auditory nerve and sends the information up the auditory pathway to the brain. The final destination is a center in the brain known as the auditory cortex, where the sound is processed and perceived.

Hearing loss can occur due to an issue in one or more parts of the ear.

Outer Ear: Blockages caused by a buildup of earwax, a foreign body, swelling due to outer ear infection, etc. can prevent sound from reaching the eardrum and being transmitted further along the auditory pathway.

Middle Ear: The most common source of hearing loss in the middle ear is a temporary buildup of fluid, due to infection. Other causes include problems with the ossicles (such as fixation or dislocation) and growths in the middle ear cavity.

Inner Ear: Damage to the sensory hair cells in the inner ear is the main cause of hearing loss. These cells are most commonly damaged by exposure to loud noises, although they can also be damaged by infections of the inner ear, high fevers, and various factors associated with aging (Presbycusis).

There are many types of hearing loss:

Sensorineural hearing loss: Caused by damage to the sensory cells of the inner ear or the auditory nerve. Except in rare cases, this type of loss cannot be remedied by medication or surgery.

Central hearing loss: This occurs when the central nervous system fails to send a readable signal to the brain, which is called a central auditory processing disorder. People with central hearing loss generally can hear all sounds, but can’t separate or process them. This type of hearing loss is rare.